Angelo Siino, proprietor of the Monterey Boat Works, learned the trade of boat building from his father in Italy, continued in his father’s employ when the elder Siino moved from his native Isola Delle Femine  to Pittsburg, California in 1902.

​Strictly, it was 1903 when Angelo became a resident of the United States because the difficulties of moving quarter of the way around the world made it necessary for the father to come first. In 1916, Angelo and his brother-in-law, Salvatore Annello, decided they would rather live in Monterey and entered the employ of Ford Peterson who then had his boat yard in New Monterey near the present site at the Monterey Cannery.

Later Peterson built the boat yard which is now a familiar sight at “China Point” and the Siino brothers continued to work there.  After a few years of working for other people, the Siinos decided they would rather try it alone and each went into business for himself. Angelo put his shop “inland” near the Haldorn residence.

In 1925, Angelo built the yard which he operated until a few years ago as the Siino Boat Works near the Hovden cannery. In the meantime the Peterson yard had passed into the hands of the popular Gus Smith who operated it till his death. In 1937 Siino acquired that yard from the Smith estate and began moving his main operations there. He still keeps his Siino Boat Works property but uses it only for storage of materials.

Although he is teaching his sons to build boats with the most modern tools and though he keeps step with the most modern methods of machine work in boat building, Angelo recalls vividly the day when his father taught him the use of hand power tools. MUST BE STRONG.
He became reminiscent the other day as he was boring holes for nails in a boat’s planking, using an electric drill. “You know—my father would build a boat this size all by hand. He would bore these holes with a gimlet.” After meditating a minute he added, “And he even made the gimlet.”

But machine work methods have not given Angelo any notions of laxity in work. “A boat has to be strong” he says, and makes them that way.

“Since 1925 I have made about 75 boats,” he said. “Before that I forget how many I worked on when I was working for my father or Mr. Peterson. “That means that Siino’s local business has turned out five or six boats every year—and that means they have been busy years.

From Boat Builder to Chief of Police

According to Ray Siino, Angelo’s oldest son, by the time he finished high school in 1934 he had learned enough skills about boat building to take his uncle’s place at the Monterey Boat Works. Frank Marinello left that year to join the Monterey Police Department.

Born and raised among the Italians-Sicilians of San Francisco’s North Beach, well able to take care of himself during any street brawl or other fracas, Frank Marinello always thought he would make a good cop.
​
Once past grammar school, he had gone to work as a Stevedore along the Embarcadero. He had seven sisters and two brothers so it was necessary for him to become a wage earner at an early age to help his parents Francisco and Rosa Marinello who had come to the United States from Sicily in 1896.  Frank was born in 1903.

An emergency forged Frank's destiny, the Thanksgiving Day storm of 1919, left half of Monterey‘s fishing fleet wrecked and stranded on the beach.  Frank’s brother-in-law, Angelo Siino, operated a boat works which was desperately in need of help in salvaging and rebuilding the fishing vessels. On January 6, 1920, Frank, age 17, arrived in Monterey driving a 1916 Model T Ford at the state speed limit of 30 miles per hour.  It had been an all-day trip from San Francisco over the San Juan Grade.  For the next six years he lived with his oldest sister and her husband and learned the boat building trade, which he practiced for some 14  years until business fell off to the point where he had to find another livelihood. He joined the police force in Monterey in 1934.

The policeman in his day were mostly six footers or taller. Frank was only five-nine, but with a very solid muscular build. Thinking he was too short to qualify, he did not apply for a job on the police force, until that year, and then only in another emergency—the Great Depression.

To continue the story select one of the titles below.
Becoming a Police oficer
Excepts from Article

The crash of 1929 hit the West Coast during 1932-33. Jobs at the Siino Boat Works were at a minimum and I now had the responsibility of supporting a wife and family.  We were moving from one house to another trying to skimp enough off the rent to buy groceries. I was pounding abalones on the Wharf for a living.

The desire to become a policeman had been instilled in me since childhood, but at the moment the thing that attracted me to a police job was the pay, $142.50 per month.

“In those days it wasn’t the ability to perform or the education that counted but who knew whom . . . By 1934 I was well known on the Monterey Peninsula and had the support of many people and organizations.  I prevailed on some of my closest friends to pave the way for me.  A delegation approached the City Attorney, Argyll Campbell, a powerful man both in appearance and in politics.  He sent for me and asked what kind of job I wanted – policeman, deputy sheriff.  I replied that I wanted become a policeman for the City of Monterey. He informed me that the job was as good as assured, but sent me to the city manager, Del Dorton.
Dorton tried to discourage me, saying that police work was tough. Well, I felt tough, weighing over 200 pounds and none of it flab, but all muscle from boat building. He directed me to see the Chief of Police, Fred Moore.

More had succeeded to the job when his friend and sponsor, Phil Oyer had died in 1932. Apparently he was a little teed off that I hadn’t come to see him first instead of going to Campbell and then Dorton.  He threw silver badge number 6 on the desk in front of me and told me to report in the morning.

I wasted no time in getting my uniform.  I bought a gun, handcuffs, club, day gear, night gear, the works.  The only thing the city provided was that silver badge which looked as if it had been through the Civil War, scratched and bent out of shape.  But who was I to complain?  Now I could pay up some of my debts.
​
It was customary, however, to invite the chief and the city council to dinner when such an appointment was made.  Within a week a large Italian style dinner was cooked up by my wife. Little did the guest know that it was costing me half of my first month’s salary.  But that's the way things were in 1934.  On September 19, I was officially sworn in and the next day I was given my first assignment – to issue citations in civilian clothes, to all motorist who did not come to a full stop at Del Monte avenue and Alvarado street.  I hadn’t even been given instructions on how to fill out a traffic ticket.
Moving Up The ranks
Frank Marinello was put on the night shift from 6pm to 3am and pounded a beat for the next 18 years.  He worked a six-day week with Wednesdays off.
​
As a foot patrolman I developed my own routine, acquainting myself with various hangouts, making friends of bartenders, gambling house owners and bouncers, barbers, pool hall habitués, barmaids and waitresses, not overlooking the friendly general public – anyone that could offer information.

During the late 1930s, prior to Fort Ord being built, a government project WPA was started in that area to provide work for the unemployed, among whom were the Embarcadero and Howard street bums of San Francisco.  They were brought down here by the truckload and paid about $12 a week.  Their first thought on being paid was to come into town and get drunk.  There were times when we had as many as 75 or 80 sleeping it off in the old jail cell.

From the early 1950s through the late 1960s the Monterey Police Department became known and recognized as one of the most outstanding departments for its size in the state of California. Frank jumped the rank of sergeant and was made a lieutenant in 1940, advanced to captain in 1949 and was made Deputy Chief in 1951.  In 1956 he was selected as one of 26 charter members of the Law Enforcement Intelligence Unit in California, under the direction of the attorney general.  The intelligence Unit was commended by the President of the United States for its efforts in curbing organized criminal activities.

Frank Marinello became Chief of Police on January 1, 1964.  According to Chief Marinello, his toughest jobs, and the highlights of his career were that handling of the Pop Festival of 1967 with no major incidents among the approximately 50,000 visitors, mostly teen-agers. The eleven consecutive years of handling the crowds at the Monterey Jazz Festival, 1957 through 1968 without major incidents.

Chief Marinello retired on September 1, 1968, a week after his 65th birthday. 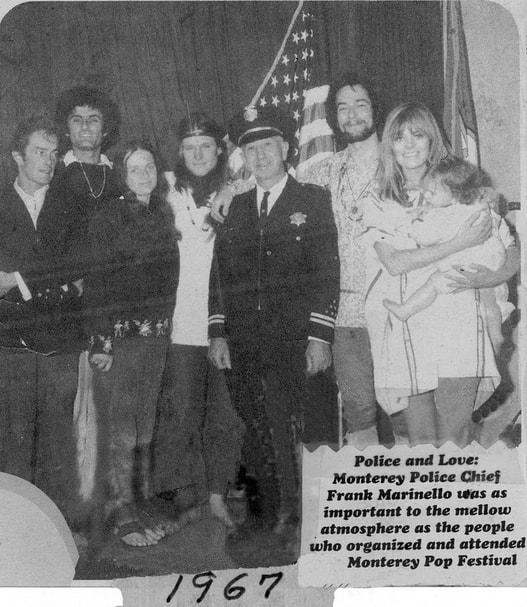 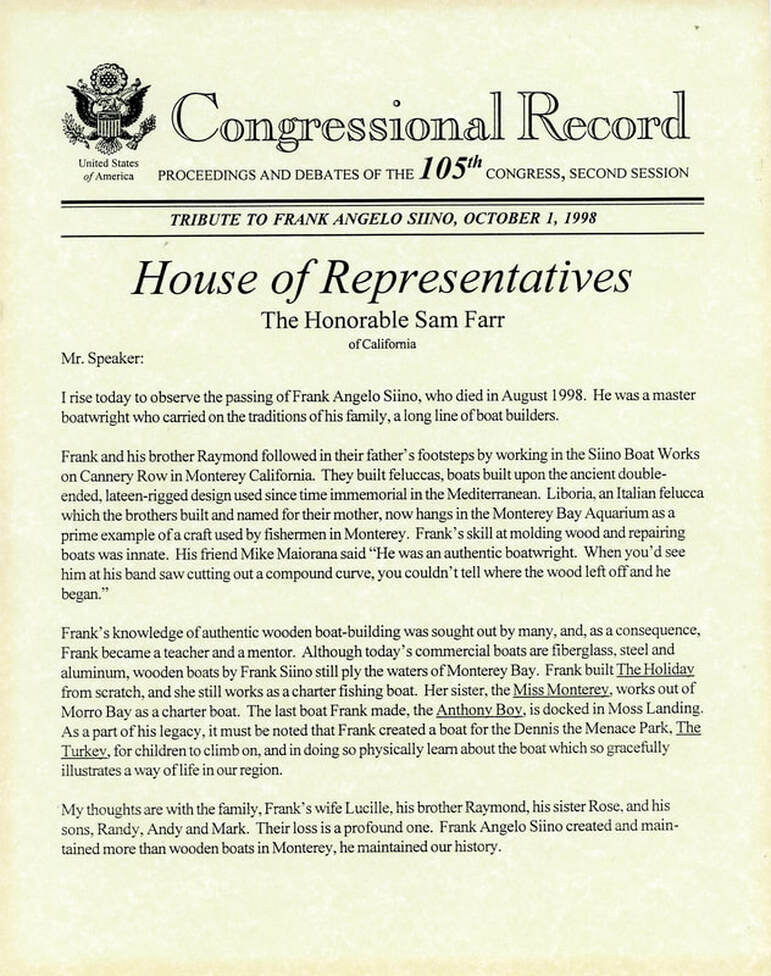 In this movie, an outing on the General Pershing, Mike Maiorana pays "The End of an Era" tribute to Master Boatwright Raymond Siino.